by Rovo and System 7 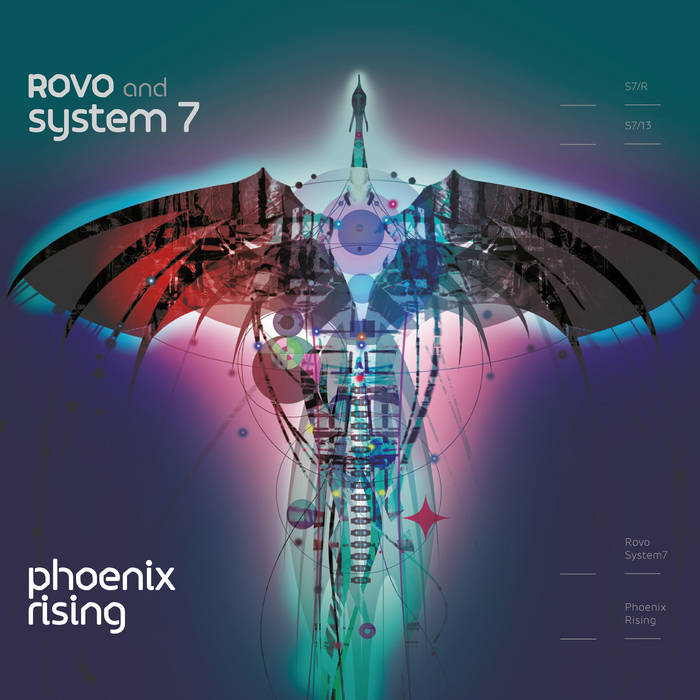 Veganhead Fave track: Cisco (Phoenix Rising version) but sadly you can't get to hear this as a sample. If you like prog, EDM, trance, jazz rock ... buy it.

Rovo are a completely original progressive spacerock jam band from Japan, featuring two drummers like the Grateful Dead. Ambient techno original Orb collaborators System 7 delve into their live psychedelic rock past and profound influences like Jimi Hendrix. Together Rovo and System 7 produce an exciting intense and futuristic sound that morphs effortlessly between tech-house beats and totally live playing, also touching post-rock textures of groups like Sigur Ros. With extended live solos from Rovo’s Yuji Katsui and Seiichi Yamamoto and of course from Steve Hillage, the Phoenix Rising builds to a stunning climax midway with the track “Cisco” that reveals a strong influence of seminal German bands like Can. One of the highlights is a brilliant live version of the Mahavishnu Orchestra’s “Meeting of the Spirits”, featuring the blend of Steve Hillage’s guitar and Yuji Katsui’s electric violin.

“This is a remarkable album: it bridges the gap between Hillage’s ’70s output and System 7 stuff amazingly well and Rovo are exceptional musicians that make this just a perfect whole. I look forward to seeing this album played live next year as I can imagine just how good its going to sound” (Gary Parsons – freq .org .uk)

“An album right up there with the best of Hillage’s work.. a rare trip of a record” (Prog Magazine)

“..simply stunning at times. If you have a decent sound system and a love of progressive rock with Ibiza-ish dance pretensions, dive right on in.” (Sunday Express)

Produced by Steve Hillage and ROVO

Seamlessly morphing from techno beats to live drums, the LP is a rich and sophisticated blend of electronics and completely live playing , made possible by the skilled musicianship of eight players. ... more

Bandcamp Daily  your guide to the world of Bandcamp

Interviews With Butcher Brown and Slauson Malone, plus LP of the week by SAULT.